Four years after the Jurassic World theme park was closed down, Owen and Claire return to Isla Nublar to save the dinosaurs when they learn that a once dormant volcano on the island is active and is threatening to extinguish all life there. Along the way, Owen sets out to find Blue, his lead raptor, and discovers a conspiracy that could disrupt the natural order of the entire planet. Life has found a way, again. KIDS FIRST! Film Critic Calista B. comments, “I was surprised by how much I liked this movie. It is genuinely entertaining and, I think it’s a good way to conclude the franchise, even though I know it probably won’t be the end.” See her full review below. 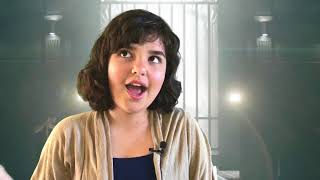 I’ve never really been a huge fan of the Jurassic Park franchise. I felt it went on for way too long and it needed to end. But, I was surprised by how much I liked this movie. It is genuinely entertaining and, I think it’s a good way to conclude the franchise, even though I know it probably won’t be the end.

The story takes place three years after the events of Jurassic World. When the island the dinosaurs inhabit is about to be destroyed by a volcano, Claire and Owen go to rescue the remaining dinosaurs.

So first I want to talk about visuals. It’s not really a surprise that the visuals are really good. The dinosaurs look great. Combine that with great sound and the fact that, you can essentially feel the scale and weight of the dinosaurs. It feels as if they are actually there. Along with some really cool shots of the island and the Lockwood Mansion, the presentation of this movie is fantastic. The shot that was used in the trailers of Owen running from the volcano with the dinosaurs and being encompassed by ash, looked really compelling to me. It is one of my favorite shots in the movie and the presentation helps a lot. But, there is one particular scene that they hold on a brontosaurus that really tugs at your heartstrings. It probably wouldn’t have been as good if it wasn’t for the way the shot was directed. (J. A. Bayona)

The actors in this movie are also really good. Chris Pratt as Owen stands out to me, but that’s mostly because I really like Chris Pratt. But, Chris Pratt is still very good. He has great comedic timing and he is really funny in general. However, he’s the second best actor. Hands down, the best actor in the whole movie is Isabella Sermon as Maisie, the granddaughter of Benjamin Lockwood. This girl is absolutely amazing in this film. Talented child actors are hard to come by and wow, this girl is really fantastic. Her scenes are very compelling and she clearly is very invested in her role. I really felt for her, especially during the emotionally terrifying scenes. This is Isabella Sermon’s first role and she is great. I genuinely look forward to what she has next in store. She has a bright future ahead.

Now, I mentioned earlier that I felt this movie would be a good conclusion to the franchise. The Jurassic Park franchise has been around since the 90s and the series is still going. I feel like it’s been going for too long and I hope it doesn’t continue for much longer. I know the series is very popular, but a lot of franchises have worsened from going on for a long time just because of their popularity.