After the events of Captain America: Civil War, King T’Challa returns home to the reclusive, technologically advanced African nation of Wakanda to serve as his country’s new leader. However, T’Challa soon finds that he is challenged for the throne from factions within his own country. When two foes conspire to destroy Wakanda, the hero known as Black Panther must team up with C.I.A. agent Everett K. Ross and members of the Dora Milaje, Wakandan Special Forces, to prevent Wakanda from being dragged into a world war. KIDS FIRST! Film Critic Calista B. comments, “Honestly, this movie is just amazing. There are so many things this movie does incredibly correctly. This might be one of the greatest Superhero movies of all time!” Kimbirly O., KIDS FIRST! Adult Juror adds, “The film is pure Marvel action-adventure with a broad political and socially aware feeling. It is awake and unique. It may be a superhero film, yet it is also steeped in real political and social issues similar to those we face today, especially diversity and inclusion.” See their full reviews below. 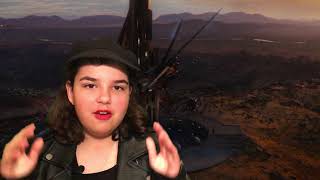 Honestly, this movie is just amazing. There are so many things this movie does incredibly correctly. This might be one of the greatest Superhero movies of all time!

The story is about T’challa, prince of the secluded, incredibly advanced nation of Wakanda, who struggles to defeat an enemy wanting to take his throne. He teams up with some phenomenal females to secure his role as King.

This film is just visually incredible, especially the city of Wakanda. The city looks so amazing. All the buildings and creations are so cool. But that’s not all. The designs of the weapons and spaceships look very realistic and straight up awesome! Kudos to the visual effects team! I also loved the Black Panther suit. I love the idea of the suit absorbing hits into stored kinetic energy and using it as a shockwave like blast. The movie starts with a re-telling of the creation of Wakanda, but it was made out of sand. It looked so cool. In general, the aesthetic nature of this movie is just marvelous.

The nation of Wakanda also has a very interesting culture. I like that it blends futuristic technology with a tribal feel, in terms of the fashions, locations and culture. It may seem like an odd blend, but it works well. Even the music reflects this combination. Speaking of which, the music is also fantastic.

The characters in this film are multi-dimensional. I really enjoyed Everett Ross (Martin Freeman) and Black Panther himself (Chadwick Boseman). Plus, Sterling K. Brown (one of my favorite actors) is also in it and, while he has a small part, it is a key role. Hands down, the best characters are the female leads. The Future is Female! And there are some cool dudes. This movie has some wonderful female characters that everyone can look up to such as Danai Gurira, who I already love from AMC’s The Walking Dead, plays the highly skilled warrior Okoye. Letitia Wright plays T’challa’s tech-savvy little sister, Shuri and Lupita Nyong’o plays Nakia. I love these women and I’m sure many young kids will too.

This movie also has very interesting messages. The whole movie presents engaging thoughts on whether or not you should enter in other nation’s affairs and the possible consequences of doing so. This is a pretty intriguing and well done storyline. I give this movie 5 out of 5 stars and recommend it for ages 11 to 18. It opens in theaters February 16, 2018 so go check it out!

When T’Challa returns home to the reclusive, beautiful and technologically impressive nation of Wakanda, a fictional country in Africa, he is named the new leader following the death of his father. True to custom, he is challenged by the tribesman and becomes the new King.

Elsewhere, a cousin unknown to him returns from the United States to challenge T’Challa’s reign, and chaos ensues. Warmonger (Michael B Jordan) and his political beliefs are diabolical and the opposite of T’Challa’s. As foes set forth to destroy Wakanda, Black Panther teams up with a C.I.A. agent and a neighboring tribe to prevent the country from a world war. The path from light to dark, and back to doing good in the world beyond Wakanda is refreshing.

The film is pure Marvel action-adventure with a broad political and socially aware feeling. It is awake and unique. It may be a superhero film, yet it is also steeped in real political and social issues similar to those we face today, especially diversity and inclusion. The strong female characters – Nakia (Lupita Nyong’o), Okoye (Danai Gurira) and Ramonda (Angela Bassett) are phenomenal.

I love this film! From the casting, cinematography and directing, to the special effects and female empowerment, it is fulfilling. The action is believable, many of the fight scenes are based on African martial arts, although the CGI at times is a little whack. Overall, I was displaced, forgetting I was sitting in a theater. The costumes are fantastic with attention to detail befitting royalty. Wakanda forever!

I give this film 5 out of 5 stars for the cast, social and political awareness, technology focus and female empowerment. This film will appeal to ages 8 to 18, as well as adults. I caution younger viewing due to fight scenes which may be disturbing. It opens in theaters February 16, 2018 so, check it out!