Peter Rabbit, the mischievous and adventurous hero who has captivated generations of readers, now takes on the starring role of his own irreverent, contemporary comedy with attitude. In the film, Peter’s feud with Mr. McGregor (Domhnall Gleeson) escalates to greater heights than ever before as they rival for the affections of the warm-hearted animal lover who lives next door (Rose Byrne). James Corden voices the character of Peter with playful spirit and wild charm, with Margot Robbie, Elizabeth Debicki, and Daisy Ridley performing the voice roles of the triplets, Flopsy, Mopsy, and Cottontail. KIDS FIRST! Film Critic Carla P. comments, “Peter Rabbit is one of my favorite kid’s movie of the year so far. It’s an adorable film that is perfect for the whole family. I love this film because of the acting and CGI.” Morgan B. adds, “Adorable, humorous, charming and a heartwarming tale just in time for Easter and spring!” See their full reviews below. 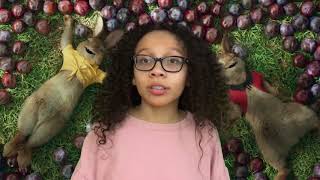 Peter Rabbit is one of my favorite kid’s movie of the year so far. It’s an adorable film that is perfect for the whole family. I love this film because of the acting and CGI.

Peter Rabbit follows Peter Rabbit, Flopsy, Mopsy, Cotton Tail and Benji as they get into mischief by taking vegetables from the garden next door. They take the vegetables from Mr. McGregor who tries desperately to get them out of their garden by using explosives and even an electric fence. The rabbits hang out with loveable characters like Bea. She helps the rabbits by giving them shelter when it rains and helps them get food.

Throughout the movie, we see great acting from all the actors and voice actors in the film. I love how Domhnall Gleeson acts like a soulless man with the rabbits who he is trying to kill, but with Bea, he acts like in he’s love. I found that Mr. McGregor (Domhnall Gleeson) really does seem to be in love with Bea. I also like how the voice actors portray the rabbits. Each one of them has a personality that is well portrayed in their voices and actions. For example, Cotton Tail is a memorable character because of how wild and reckless she is. The way Daisy Ridley voices her shows how wild she can be. 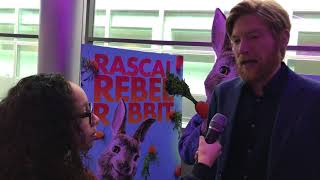 The CGI in this film is extraordinary. The animals look so realistic. If you really focus on the rabbits, you can see the individual hairs on them. You can also see it on the pig character that hangs out with the rabbits. During a fight sequence with Peter and Mr. McGregor, they actually look like they are fighting and not like he is fighting a fake bunny. 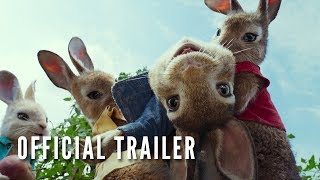 Adorable, humorous, charming and a heartwarming tale just in time for Easter and spring! You will be hopping as fast as you can to catch up with the rabbits and all the other animals that are, once again, calculating how to get into Mr. McGregor’s Garden.

Peter Rabbit is based on the books by Beatrix Potter. Beatrix Potter lived from 1866 to 1943 and is one of the best-loved children’s authors. She wrote and illustrated 28 books and each one has been translated into more than 35 languages. They have sold over 100 million copies. This is important because one of the main goals for the director and the cast was to stay true to her vision.

The beauty of this film is that the rabbits all look as if you could touch them because the animation is so life like. The scenes with the garden and house look like places that I would enjoy living because they look like a fairytale that came alive. Of course, if you don’t share your vegetables your life will not be enjoyable.

The moral of the film is about getting along with others, telling the truth and being honest. Everyone makes mistakes and we need to find a way to fix them.

Thump, click, crack, snap, thud – all these noises, plus thousands of other sounds effects add to the humor of this film. The music is outstanding. I cannot wait to purchase the soundtrack. There is a combination of movie symphony music, sounds from the 80s, new original songs and a plethora of songs and sounds that will put a smile on your face.

Of course, the comical James Corden makes a perfect bunny. Peter Rabbit is my favorite character, full of sassy and classy moves and words of wisdom. His humorous and quick-witted lines made me burst out laughing when I watched the film. He also has a very kind heart, which I love. Corden brings his quirky personality that we see on his late night television show to this part.

On the other hand, I also love the adorable Flopsy (Margot Robbie). She is so cute and cuddly, knows how to fend for herself and I just love her. She is the perfect role model for kids because she teaches how you can be both smart, cute and a fighter. Margot Robbie adds a bit of quirkiness to this character because she is the one and only Harley Quinn. She is the complete opposite – serious and tough – in the recent movie Christopher Robin. I loved meeting her in person.

My favorite scene is when Mr. McGregor (Domhnall Gleeson) is electrified by the bunnies. This scene is absolutely hilarious and quirky. I could not stop laughing. Seeing bunnies figuring out how to use an electric fence was shocking.

Ever caring, kind Bea (Rose Byrne) is the sweetest. She is the hero who protects the animals at all costs. I relate to her a lot. She is funny and a bite odd. Cotton-Tail (Daisy Ridley) is one tough bunny. You know that this film is magnificent when the star of Star Wars appears in it. Cotton-Tail is young, yet very feisty and tough. It reminds me of her character in Star Wars: The Last Jedi.

I recommend this film for ages 6 to 18 and give it 5 out of 5 stars. Kids will adore the bunnies and the other talking animals. The teenagers will love the hummer and fun scenes that the younger kids don’t understand. This film is a perfect for the entire family so grab a bag of carrots, radishes and turnips and head to the theaters. It opens February 9, 2018.