Inspired by the imagination of P. T. Barnum, The Greatest Showman is an original musical that celebrates the birth of show business & tells of a visionary who rose from nothing to create a spectacle that became a worldwide sensation. KIDS FIRST! Film Critic Abigail Zoe L. comments, “The movie musical The Greatest Showman is one of the best movies I have seen in a long time. Everything is delightfully fantastic, including the story, acting, music, songs, dancing, and costumes. It also has many thoughtful messages.” Abraham F. adds, “This movie is super vibrant and colorful, making it all the more interesting. It also proves that you don’t have to look like everyone else to be normal, which I like.” See their full reviews below. 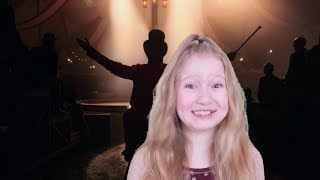 The movie musical The Greatest Showman is one of the best movies I have seen in a long time. Everything is delightfully fantastic, including the story, acting, music, songs, dancing, and costumes. It also has many thoughtful messages.

The film tells the story of the imagination and creations of P.T. Barnum, the successful businessman who brought us the circus. It begins when Barnum is just a boy and has both big dreams and a big crush on an upper-class girl. Barnum rises from a homeless boy to a very wealthy and successful man. He creates the first museum of oddities and a very entertaining show (known as the circus), full of unique persons such as the Bearded Lady, trapeze artists, the shortest and tallest men in the world and more. Along the journey, he has a lot of ups and downs, but he always seems to triumph over them.

The opening scene with song and dance is my favorite and got me moving in my seat. My other favorite scene is when cups are used to create rhythm in the song when Barnum convinces a wealthy young man to partner with him. The costumes are amazing and my two favorites are Barnum’s colorful ringmaster suit and Jenny’s dress with beautiful shiny rhinestones.

Two of my most favorite characters are P.T. Barnum, played by the multi-talented Hugh Jackman and Anne Wheeler played by Zendaya. Hugh Jackman is believably brilliant playing someone who can win, lose and win again. Zendaya has a wonderful singing voice and does her own amazing acrobat stunts.

Additionally, the perfectly written and woven songs in the movie by composers Justin Paul and Benj Pasek stand out in my mind. In fact, these songs tell the story, on their own, of this wonderful movie musical.

Finally, the message of this film is best summed up in the ending credit quote and by P.T. Barnum himself which is, “The noblest art is that of making others happy.” I personally believe this to be true, do you?

As a KIDS FIRST! Film Critic I have been extremely fortunate to review many wonderful films and I can say without a doubt that The Greatest Showman is one you absolutely do not want to miss. I think it may also be one of the best films of 2017. I recommend this film for ages 8 to 18 as well as adults and give it the highest KIDS FIRST! rating: 5 out of 5 stars! It opens in theaters December 20, 2017, so, be sure to check it out!

Click here to order tickets online and avoid the lines at your local movie theater. 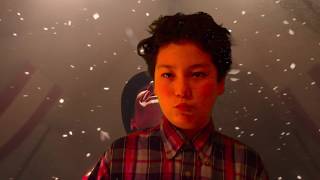 The Greatest Showman is a musical based on the true story of P.T. Barnum. This movie is super vibrant and colorful, making it all the more interesting. It also proves that you don’t have to look like everyone else to be normal, which I like.

The storyline explores the life of Phineas Taylor Barnum, a boy dreaming of becoming a performer. Once he becomes an adult, he marries his childhood love, Charity Hallet. They live in an apartment with their two children in New York until Phineas is laid off from his job. Phineas goes back to his dream of becoming a “Showman” and starts to look for cast members for his show.

P.T Barnum (Hugh Jackman) portrays “The Greatest Showman” in a very animated and lively way, making him stand out among others. P.T. Barnum’s partner, Phillip Carlyle (Zac Efron) is a well introduced supporting character. There are many interesting things about this movie. For example, the music was composed by the same people that composed the music for La La Land. Next, Zendaya did all her own trapeze stunts. Third and last, this movie has been a dream for Hugh Jackman since 2009.

My favorite part is the bar scene when P.T. Barnum is trying to convince Phillip Carlyle to be his assistant and they start to sing and dance. It leads to Phillip Carlyle joining the circus. The message of this movie is that you don’t have to look like everyone else to be normal, which I like a lot. This movie has a few things you should be aware of, such as a scene when two characters are taking shots at a bar. There might be a few risky things kids might try after watching it such as doing trapeze tricks. I give it 4.5 out of 5 stars and recommend it for ages 9 to 18 as well as adults. This movie opens in theaters December 20, 2017, so be sure to check it out.